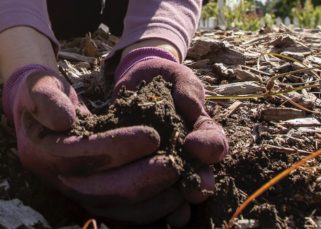 In March 2019 we received a surprise letter in the mail. The Snohomish Conservation District had selected us as “Conservation Leaders of 2018” in the Urban/Suburban Homeowner category. A month after receiving the award at a ceremony in April, the Conservation District contacted us. They wondered if we would be willing to have a film crew record footage of us at home for a piece Better Ground was filming to promote the value of Conservation Districts to homeowners.

On a hot July morning, a crew of three photographers arrived. They spent six hours filming us in the garden, and interviewing us about the many ways we conserve water, energy and money. While one recorded video, two others roamed the garden finding background images to capture. Our vegetable and herb garden, rain garden, rain barrels, and other conservation efforts we had made, many with Conservation District assistance, got the paparazzi treatment. They told us once they reduced it all to short video it would be posted on YouTube.

In Late September, a friend we ran into while walking said, “Hey, you’re famous! I saw you on YouTube.”

As soon as we got home we looked up the Better Ground campaign on YouTube. There we were in two videos, the one linked above, under forty seconds. Another a minute longer showed more of the garden and construction process.

Water may often be the last thing we think of saving.hen we think about climate change. Saving water is imperative to reduce carbon emissions, Conserving water is a key link in the chain of actions. It takes energy to pump and treat water for household consumption. Waste water and runoff from roofs and driveways, and lawns overwhelms treatment facilities. Unfiltered water then flows into rivers, lakes, and estuaries. The cost to municipalities is significant. The cost to the environment even greater.

Water, Water, How Does Your Water Flow?

The individual homeowner and taxpayer is not the only beneficiary of Conservation District services. Natural systems are the first and least energy intensive way to absorb and store carbon. Imagine the single layer of blades of grass constituting a suburban lawn. Then imagine growing layers of annual and perennial herbs, vegetables, flowers, perennial shrubs. Add grasses allowed to grow tall, interspersed with taller shrubs, small trees and towering shade trees. You can probably guess which has the greater leaf surface in which to sequester carbon. Additionally, woody material holds onto that carbon for a very long time.

The underground component of a variety of plants is another significant reservoir for carbon. Roots growing deep and wide below ground mirror the plant above. The underground portion of the plant penetrates soils and transfers nutrients to deeper storage. The whole system of natural layers has worked for centuries, millennia, even eons. We would do well to emulate it.

Our fifteen seconds, or in this case one minute seventeen seconds, of fame are a mere nanosecond compared to the length of time nature has been managing to thrive, multiply and diversify. We do well to emulate what we can observe and make new systems that can support those already in play. Nature may surprise us in ways we never planned. Conservation Districts and the assistance they provide unpaved the way to allow nature to show up in abundance. Better Ground captured some of those surprises to share.