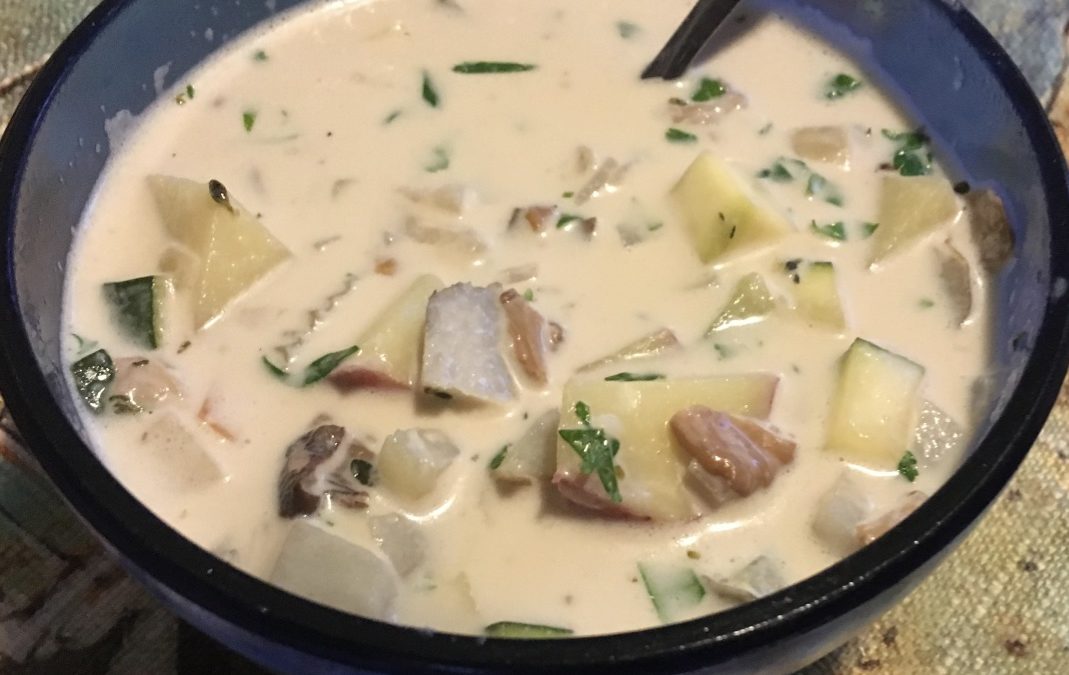 My own celebration of this day has been shifted to a month later in honor of my mother, with whom I shared a birthday for 62 years. Even though she is no longer physically present, chowder brings her memory to mind.

According to NationalToday, “Originally considered a poor man’s food, the first chowders … made from vegetable and fish stewed in a large pot or cauldron. (The word “chowder” possibly finds its roots in the Latin word “calderia,” or cooking pot.) Clams are thought to have been introduced … by Native Americans and by mid-1800s were considered a main ingredient in what came to be known as clam chowder. Today, there are dozens of regional variations….”

Since original chowder did not contain clams, and having shifted from being pescatarian to vegan, I have experimented with ways to recapture the pleasure of clam chowder without grit and grime. Clams are filter feeders. They suck in muck at the bottom of salt water edges where they live, filter out their foodstuffs, then spit out sand and silt particles. Well, they spit out most of it.

Anyone who has ever eaten clams is familiar with biting into grains of grit that inevitably remain in any morsel containing meat of these mollusks. After all, Clams are close relatives of oysters. Oysters are known for the pearls they create around a grain of sand remaining within their shells. To protect my own pearly white grinders from the ravages of grit I prefer chowder without the trepidation of those surprises. Additionally, since sediment in which clams live is often laden with a soup of pollutants, I avoid ingesting those toxins by avoiding shellfish.

Due to allergies, I no longer include dairy or wheat-based roux as thickener for chowder. Having experimented for years with how to recapture the pleasure of chowder remembered from childhood, without pain and suffering, and including what is available in the garden, here is my latest recipe for a clam-less, dairy free, gluten free chowder:

First, place the potato cubes in a pot, cover with boiling water, salted generously. Simmer a couple of minutes while chopping the remaining vegetables, drain potatoes and set aside.

*Since our birthday is National Spinach Day, I made this dish healthier by sneaking greens into it. Adding chopped greens just before serving is a great way to increase nutritional value of any chowder. I hope my mother would have found this version as pleasurable and true to her Bostonian heritage as the many bowls we shared.