It all started with a can of cat food 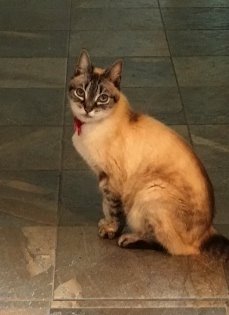 It all started with a can of cat food. This turned into an example of how one decision can lead to so much information it can either be debilitating, or filter choices to a manageable few. In this case, it began with an elderly feline who showed up and stayed. That was over a year ago. She appeared in the backyard, barely able to stand, dehydrated, emaciated and riddled with fleas. When I started writing this post, she had been with us for about a year and four months. Sadly, she collapsed a few days after Christmas and we followed the emergency veterinarian’s advice, let her go and relieved her of any more pain and suffering.

When she first arrived, we bought the first healthiest canned food we could find. We knew she needed the very best nutrition to recover from all that ailed her. She gobbled it up and improved rapidly. A week later, fleas gone and meds on board for hyperthyroid and arthritic hips, we treated her to a visit to the groomer. She had gained a pound in one week from five and a half to almost seven pounds.

We kept her on a steady diet of Dave’s Chicken formula. As her thyroid levels stabilized she became a less voracious eater, down to the recommended half can twice daily from the entire can she had been gobbling at each meal. We were fortunate to find a wonderful cat sitter who is also a veterinarian technician. We were able to leave on a planned road trip two weeks after she showed up, knowing she would be in excellent hands.

A year later, she was still doing well. However, she began eating less eagerly. We sprinkled her food with Turkey kibble treats, shook nutritional yeast on it, added a little boiling water to warm it and make it easier for her to lap up with teeth that would have needed significant surgery to remedy. At her advanced age of about 16 to 17 years we did not want to risk anesthetizing her. She played us like a cat plays a fiddle, “Bring my food to me,” “I want to eat in bed,” “no, in front of the fireplace,” “don’t leave, I want you to keep me company while I eat.”

Gradually we made adjustments to her eating routine, catered to her whims.

This fall it became a challenge to get her to eat even a quarter of a can. Her weight was still good, but slipping a bit. We thought, maybe we should try a different food. And so the search for the purrr-fect food for our Queen began.

Since she loved the turkey treats, we thought we would try some formulas with turkey alone or turkey combined with chicken. One of the samples we brought home really hit the jackpot. She gobbled it up. Then we noticed it had tuna in it. Well, I have read that giving tuna to cats is like giving them crack. I went back to my source for information on how to keep your cat at their healthiest. Tuna is a no-no. It has deficiencies of nutrients cats need. It is also addictive.

WARNING: this is about to turn ugly. If you are avoiding news that is upsetting and horrific, the link in the next paragraph would be a difficult read for any humane person as it has to do with human trafficking in the fishing industry. I will not repeat any of the details here. It is up to you if you want to know the rest of the story.

About the time we were searching for suitable food, this article showed up in my New York Times newsfeed or maybe it came to me from a friend on social media:

Either way, once I started reading beyond the headline, I knew eating fish was no longer going to be something I could stomach, not for a cat, and not even for me.

I am not sure why this appeared when it did. Apparently it has been around for a while:

“A version of this article appears in print on July 27, 2015, Section A, Page 1 of the New York edition with the headline: Forced Labor for Cheap Fish.”

For me, it became a big game changer.

The United States is the biggest customer of Thai fish, and pet food is among the fastest growing exports from Thailand, more than doubling since 2009 and last year totaling more than $190 million. The average pet cat in the United States eats 30 pounds of fish per year, about double that of a typical American.”

‘Sea Slaves’: The Human Misery That Feeds Pets and Livestock

Here are a few of the less gut-wrenching facts that I have gleaned from the article if you don’t want to trudge through the gruesome details of how humans are treated:

“Shipping records, customs data and dozens of interviews with government and maritime officials point to a greater reliance on long-haul fishing, in which vessels stay at sea, sometimes for years, far from the reach of authorities. With rising fuel prices and fewer fish close to shore, fisheries experts predict that more boats will resort to venturing out farther, exacerbating the potential for mistreatment.”

So even if you are not ready to give up fish entirely yourself, and if, unlike us, you do have a cat to feed, here are a few brands to avoid since they are among the top abusers of the fishing horrors being perpetrated through human trafficking.

“In the past year, Thai Union has shipped more than 28 million pounds of seafood-based cat and dog food for some of the top brands sold in America including Iams, Meow Mix and Fancy Feast, according to United States Customs documents.”

Some more details about how the food is handled:

Once fish are caught, storing them in melting ice is a race against the clock. As fish thaw, their protein content falls, dropping their sale price. And, …because deep-sea fishing boats work on commission, “Crews only get paid if we catch enough.”

Motherships … allow fishermen to stay out at sea for months or years and still get their catch cleaned, canned and shipped to American shelves less than a week after netting.

… Once a load of fish is transferred to a mothership, which keeps the cargo below deck in cavernous refrigerators, there is almost no way for port-side authorities to determine its provenance. It becomes virtually impossible to know whether it was caught legally by paid fishermen or poached illegally by shackled migrants.”

This begs another question, why so far out at sea? Because numbers of fish in the littoral zone have dwindled too low to make fishing closer to shore profitable.

The depletion of ocean fish stock, gives me pause about eating fish and other seafood.

Pesticides and plastics in the flesh of sea animals is something else to avoid.

Poisons contained in silty bottoms are concentrated in filter feeders such as clams, crabs and oysters.

The fate of our dwindling local Orcas or Killer Whales who rely on Salmon in Puget Sound is another reason.

This piece of journalism put my willingness to continue to eat any animal from the oceans at zero. If it hadn’t been for that can of cat food, would I be here? What has made a turning point for you in the choices of what you eat?