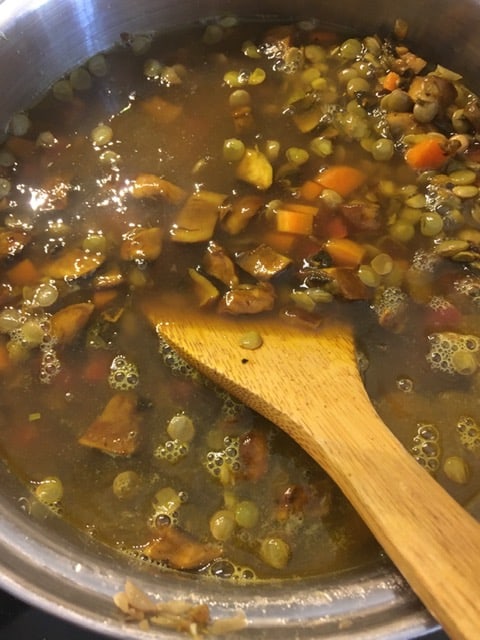 My most requested Lentil Mushroom Soup is one I learned in a cooking class at a Puget Consumer Co-op. Süreyya Gökeri owns Istanbul Imports and Café Turko with her husband Gencer.  Süreyya called the first class I took, “30 Minute Vegan.” When a couple recipes took a little longer than 30 minutes to prepare, she shrugged, saying she liked the catchy title since it was a play on a popular TV cooking show.

Since that class over a decade ago, I have probably made this soup hundreds of times, making it my most requested lentil-mushroom soup. I have made batches to serve 30 men sheltering with a local congregation and dozens of servings for potlucks. Rarely do I need to look at my worn and splattered recipe. It is committed not only to memory but to muscle. In the recipe description below, I include tips and shifts I’ve made to make it in 30 minutes start to finish, and also to please preferences for heat levels. I never make less than a double batch and those are the measurements given here.

After my first class with Süreyya Gökeri, I signed up for every class she offered. Not only was the food as delicious as it was nutritious, the classes were like a stand up comedy night. Süreyya developed a following, both for the amazing food and her laugh-out-loud asides. For instance, her description of her “skin on diet.” The “Skin On Diet” makes meal prep easier and retains the best part of vegetables. It involves leaving the skin on vegetables intact. No peeling! You had to be there for her more hilarious description.

Some skin on and some skin off

There are a few exceptions to her skin on rule, garlic and onions being two. After filling the electric kettle with water and getting it started boiling, I measure one cup of green or brown lentils into a two quart sauce pan. Then I set out the two-cup glass measuring container, chopping board and knife, onion, garlic, and about six or seven crimini mushrooms. I put a big sauté pan on the stove, heat it to medium low and swirl a good slosh of avocado oil into the pan. Süreyya’s recipe calls for a quarter of a cup of oil. I may be generous, but since I always double this recipe, I cannot bring myself to load it with an entire half cup of oil.

Next, I remove the papery skin off four garlic cloves, slice them lengthwise, then mince fine and leave in a corner of the board. I have learned the immune boosting properties of garlic are released when they are opened to the air for 5-10 minutes before cooking.

Before I grab the rest of the ingredients, I cut the onion in half, remove the outer papery peel and next thin layer. Those go into a small sauce pan on the back of the stove to make stock with my other vegetable trimmings. Then I slice the onion from root end to stalk end and then across those narrow wedges to make pieces a little larger than the lentils. These total about a cup of chopped onion, red or yellow, your choice. The chopped onion gets dropped into the warming oil. I sprinkle on a grind or two of salt and spread the onion out in the pan to sizzle slowly.

I have heard multi-tasking is not effective for the human brain. However, when I have a recipe with several steps that each take time, if one step can happen without my attention while I do another, that gets food ready to eat more quickly. Sometimes while preparing to sauté the onion, the water will come to a boil. I grind a little salt into the sauce pan sent it on medium high on the stove, and pour in at least four cups of boiling water over the measured cup of lentils. No need to wash them, the boiling bath will take care of that for you. I pop my steamer lid on top and as soon as I hear it whistle, set the timer to start counting down 15 minutes.

Five minutes in, 25 to go! Mushrooms next.

I am about 5 minutes into the process by now. I give the onions in the sauté pan a stir and adjust the temperature to keep them simmering without browning. Then I start chopping mushrooms. If you don’t like mushrooms, you won’t have made it this far. The star of this soup is mushrooms. No substitute. You pick what you like or can get. I use crimini.

I place each mushroom, stem up, on the board, make a horizontal cut almost through the middle, leaving the edge where my hand is holding it intact. Then I make vertical cuts, once through the stem, and another on either side, turn and cut across those cuts until I get to the edge I have been holding. Finally, I turn it onto the cut side and cut through the middle. If you have done the math, each mushroom is now in 16 pieces. I keep cutting and transferring mushroom pieces into the two-cup measure until it is brim full. The recipe calls for two cups, but, if you haven’t guessed, I LOVE mushrooms, so I go a little over. I imagine Süreyya smiling at that.

By now onions are getting translucent, I make sure lentils are still turning over in their water bath and bring out the spices. One teaspoon each Turmeric powder (or grated fresh if you prefer), ground Coriander, and whole Cumin seeds. I put the cumin in my little wooden mortar with a few grinds of salt and grind it enough to roughly crush the seeds. All the spices and a pinch of coconut crystals go into the pan with the onion. Süreyya would put a whole teaspoon of sugar in, but I use sugar more sparingly.

Stir and stir and smell those spices warming and giving off their incredible aromas. Just a minute or so is enough.

Once the spices have become fragrant, dump the mushroom pieces in and stir them into the spices and onion until all the mushrooms have been tinged with the yellow of the turmeric and start to absorb delicious flavor. Make sure to scrape any brown bits of onion from the bottom of the pan. Let the mushrooms heat and give up their moisture. Another thing Süreyya made sure her students knew was to NEVER boil beets or wash mushrooms. Either action would steal their succulent flavor.

Mushrooms in, Half way there!

Add the minced garlic on top of the mushrooms while they heat. Then scrub, but do not peel! a carrot or two. One or two carrots will yield the cup of diced “skin-on” the recipe calls for. The end pieces get tossed into the stock pot. Süreyya also adds a half cup (in the single version) of seeded and diced Anaheim peppers. Since my spouse reacts strongly to peppers, I leave them out entirely. I do add some optional heat at the garnish phase for those who prefer that spiciness.

Once the carrots begin to get a little tender, it’s time to bring it all together. Add the lentils to the sauté pan and mix them in, again, scraping up any bits stuck to the pan. Then pour in a quart of broth. This is where doubling the recipe comes in handy. An entire quart box can be used at once. If you have stock you have made already from these trimmings and/or others, you can use that. Sometimes I use mushroom broth (can’t get enough mushroom!) Deglaze the pan once more with the broth.

Bring to a boil and simmer, covered, ten more minutes until lentils and carrots are soft. DING! Thirty minutes (once made a few times to get your own pattern down) and it is ready (almost) to eat.

This is one of those stews or soups (you can add 1-2 cups of tomato juice the original recipe calls for to make it soupier and to serve more people) that will taste even better in a day or more. That’s why I double it. Serve it right away, set aside enough for the next day and freeze the rest to bring out when you don’t have time to prep.

When I am making it to take for a crowd I stop just before adding the stock. Contain the base for transport. Then I carry a big soup pot, the container of base, the carton(s) of stock, and juice, if using it, plus the makings for the garnish. Then I combine it all on site. No sloshing pot to worry about spilling in transit. And now for the final touch!

With or without the garnish, this is still my most requested lentil-mushroom soup. The garnish takes it to the next level of fantastic. In a small pan (I use the little sauté top to my Le Creuset pot I have had since college) warm about a Tablespoon of oil (olive oil or your choice) crumble a teaspoon or two of dried Tarragon into the oil plus a teaspoon of fresh ground black pepper. The pepper activates the immune boosting properties in the Turmeric. If you want spicy, you can add red pepper flakes or cayenne or Chili Powder as well. Mince a stalk of celery and either serve it raw for crunch or soften it a little in the oil mixture. Ladle soup into bowls and drizzle the Tarragon seasoned oil on top with a sprinkling of minced celery. “Yemeğinizin tadını çıkarın” or “bon appétit!”