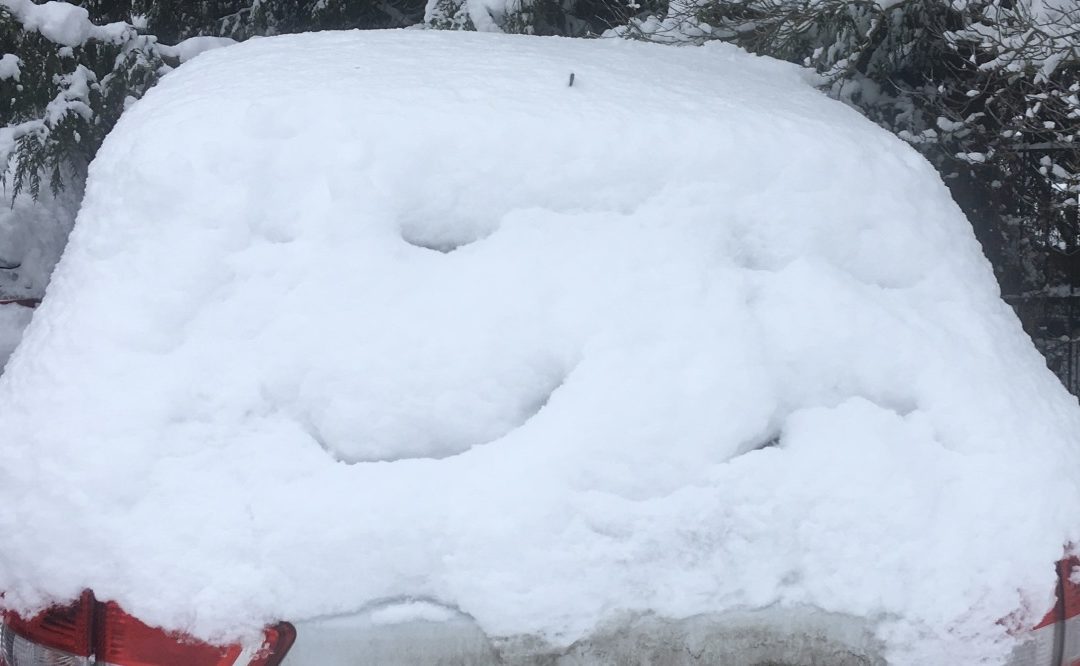 About a week after the Seattle area “Snowpocalypse” began, the accumulated snow slid off our solar panels with a THUD, making for a mucky shoveling task last night to keep the front walk clear in case of any urgent need to get out.

My presence outside shoveling in the dark proved provident for a young man recently transplanted from Oregon. I saw his car spin out and bog down in the furrows and piles of icy glop at the curb. I called to my spouse to lend a hand and went down the drive with my shovel. The car with Oregon plates belonged to a young Uber driver newly transplanted to Seattle. He was making a Dim Sum delivery to our younger neighbors to the SE. While driving down the street two houses from his goal, he braked as another car passed. His car spun into a 180 degree turn plus a slide sideways.

The neighbors who had ordered the Dim Sum, (two young professionals, both of whom we had helped shovel out so they could get to work a few days before) arrived on the scene to pick up their delivery so he did not have to turn around. The young woman explained, “I thought they would send someone with four wheel drive.”

One of the young men across the street showed up with a shovel. His mom came out to lend support and advice. Then the new renter the next house down trotted over with another shovel and strong shoulder to put into the task of pushing the car out. We had the muck shoveled from under the wheels in no time. The neighbor on the other side of us (a recluse we rarely see, except when he goes to the mailbox to check his mail. We have been shoveling most of the sidewalk beyond our driveway in front of his place) arrived on the scene to lend his hand. Five of us vied for spots to grab on the car. All pushing together, we got the car free and on its way with lots of shouted direction to “Keep Going!” “Don’t stop!” “Turn right, then right again!” to get him onto the next street, the equivalent of four blocks north, the nearest main arterial that was plowed.

The neighbors who had ordered the Dim Sum gathered up their bag of take-out and went back inside, as did the mom and son across the street. My spouse introduced herself to the new renter, whom I had met when I offered an assist to get his vehicle out of his driveway a few days ago. The recluse to the east wanted to show off how he had completed the sidewalk shoveling we had started and had also shoveled his driveway.

When my spouse and I got back inside we both looked at each other and said, “Dim Sum? Really? Who orders Dim Sum from Seattle,* in these conditions?”

Nonetheless, we both agreed, we love our neighborhood for how we pull together in times like these.

*Nearest Dim Sum is about five miles south of us. No delivery here, hence the need for Uber. (Note, names, location profession specifics were left out to save embarrassment.)