The return of the tortoises 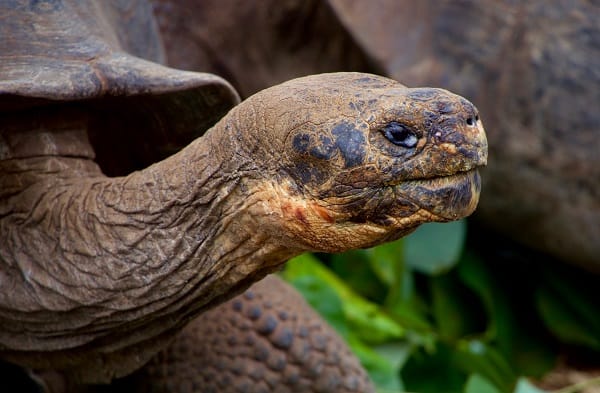 Good news today about the return of the tortoises native to Isla Española in the Galápagos Islands. This distinctive species once thrived on the oldest and easternmost island of the archipelago. In these days of mass extinctions, we may well look to the Galápagos Islands. The combined efforts of the Ecuadorian National Parks, Galápagos Conservancy and Charles Darwin Research Center are successfully saving species from the brink of extinction.

When I visited Española in 1973, almost no  tortoises at all remained on the island.

I made this comment in my October 15, 1973 journal: “…on the move again to another part of Hood (Española) at its eastern tip, … I could make out variations in the rock surfaces splotched with what was most likely lichen and very few cactus. Somewhere in there I knew the few remaining tortoises were hanging out. None of them were visible from the sea today.”

Tortoises nearly wiped out to feed crews of sailing ships

The need for feed drove whalers and sailors of yore to harvest the enormous reptiles. They could stack tortoises on their backs in ship’s hold. There the reptiles could live for months without food or water. Then the crew would have access to plentiful fresh meat whenever they needed it.

Sailors also left goats on the islands. These marauding munchers could survive on meager rations of native scraggly shrubs, lichen and prickly pear cactus. Goats proliferated and deprived the remaining tortoises of the limited food supply. The tortoises had adapted specifically to survive on the prickly pear cactus that had evolved on these isolated islands.

Between 1963 and 1974 the 14 tortoises that remained on Española were removed to the tortoise breeding center on Isla Santa Cruz. The San Diego Zoo returned another tortoise. Diego, the one who was recently “retired” from the breeding program, to the islands. Although I am not fond of confining animals in a zoo environment that can never replicate their home, this one purpose may prove valuable as species extinctions spiral out of control.

I hope this success may be one that could keep animals decimated by runaway wildfire in Australia from becoming extinct. The experience gained by programs such as the one that has returned the tortoises to Española may inform and improve the recovery efforts of other species.

All of these efforts, while noble and laudable are nonetheless stop gap bandaids. They beg us to address the underlying cause. If we expend all our energy on trying to save one species at a time, we may lose the entire ecosystems they rely on to the ravages of climate catastrophe. Our highest priority is making sure these species all have a healthy planet for a home to “return” to.