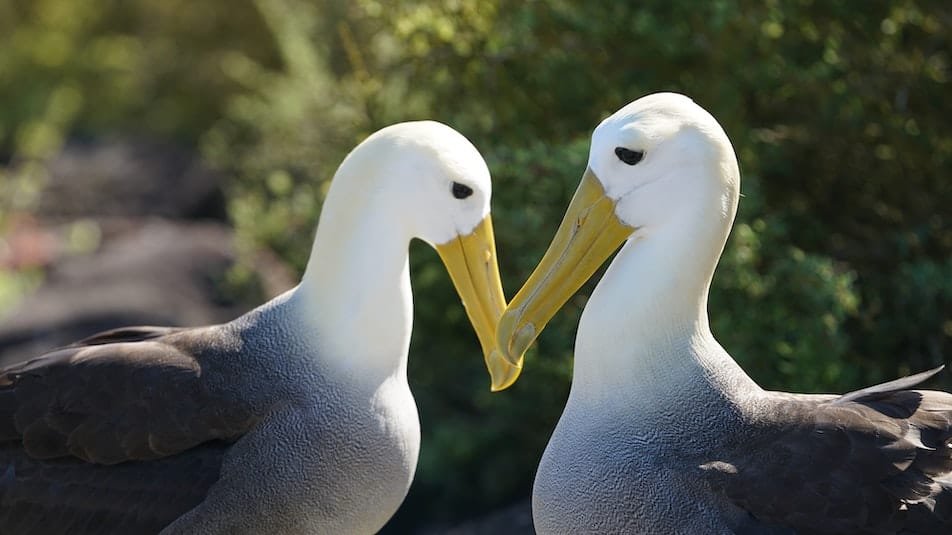 If we rely on the oceans for food, how do we care for ocean dependent creatures? The Waved Albatross is increasingly endangered. This species breeds exclusively in the Galápagos Islands. Actually, almost all on one small island. In spite of efforts to protect the birds where they breed, they face increasing danger when they leave to forage at sea.

The Waved Albatross is unique in several ways. For one, it breeds in the tropics, unlike most albatrosses who breed in latitudes farther north and south. They typically live in Arctic and Antarctic realms. One reason is they are soaring birds who are not able to lift off from ocean waters. The wave trough must be sufficiently deep to provide them a crest to launch from. The area closer to the equator is beset with doldrums. These calm flat seas do not provide the lift these birds need to get aloft.

Albatrosses fish for long periods of time far out to sea from the places where they breed. Their young rely on their parents to bring back a gullet full of digested fish to feed them until they can fly on their own.

The Waved Albatross that breeds only in the Galápagos is in danger. The National Park is going to great lengths to protect their breeding grounds. However, many albatrosses are caught and killed in fishing nets off the coast of Peru. The Galapagos National Park Service in collaboration with the Charles Darwin Foundation has been radio tagging the Waved Albatrosses of Española Island. They did so to learn where they go between December and April when the young have fledged and leave to fish far out at sea.

All Fishers are Forced Farther to Sea

Albatrosses are not the only ones having to go farther and farther to find food. A dearth of fish close to shore impacts human fishing efforts as well. Increasing distance is not only necessary, it is fraught with dangers for more than these iconic avian species.

Waved Albatrosses are in danger of extinction as breeding pairs decrease in number.

When I visited the Galápagos in October 1973, I was fortunate to visit an area of Española Island that is now off limits to visitors. There I was able to walk among breeding adults and juveniles and witness close up their struggle for survival. The wing span of an albatross is so long, they cannot take off into flight, even with a running start. I watched young fledging birds waddle close to the precipices at the edge of the shore. There they dropped off the cliff edge trusting in updrafts to lift them aloft enough to soar over thee waves. We could see the bones of birds who had not made it littering the beach below.

I also watched baby birds being fed by their parent. The young were left for long periods of time while the adults foraged for food for their young. When they have babies to feed, the adults depend more on scavenging cast-off fish from other birds in the islands. Theirs is a harsh and challenging existence. I had a most unfortunate encounter with one young bird. In spite of all my efforts at caution, I startled it as I came around the side of the bush where it was sleeping. For this reason I could understand why the Galápagos National Park restricts visitors who wish to see the Waved Albatross to one area near Punta Suareez

What happened and how my experience impacted me is one of the tales of many such encounters. I am recounting this one and more in my memoir in progress, Tortoise Moon.

Are humans responsible for the challenges facing the Waved Albatross and other species? If so, what can we do to ensure their survival? Parks such as the Galápagos can only go so far. What else can we do to assist those efforts?